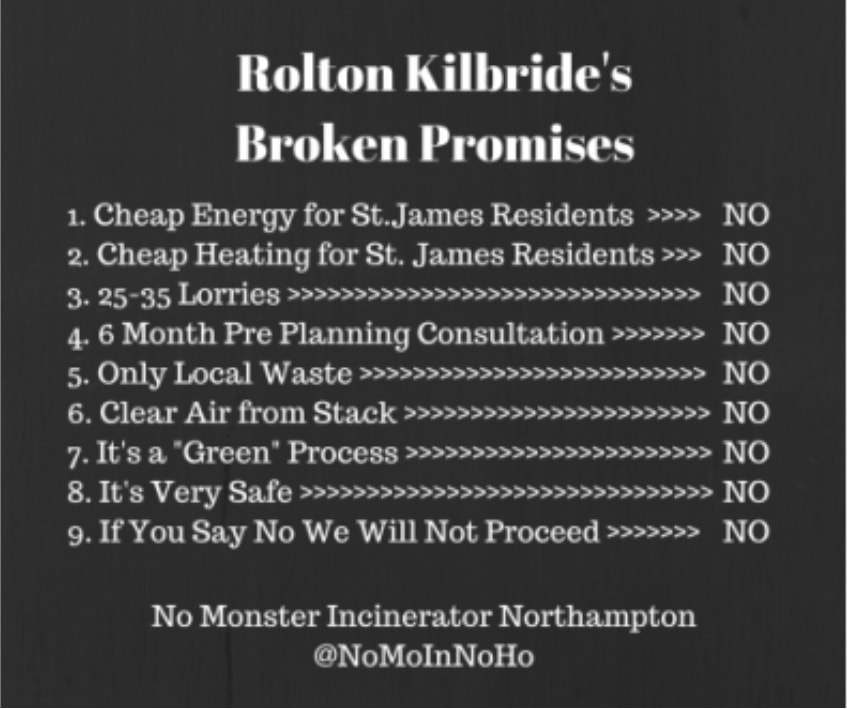 Rolton Kilbride's Broken Promises
1. Cheap Energy for St James Residents = NO!
2. Cheap Heating for St James Residents = NO!
3. 25-35 Lorries = NO!
4. 6 Month Pre Planning Consultation = NO!
5. Only Local Waste = NO!
6. Clear Air from Stack = NO!
7. It's a
Green Process = NO!
8. It's Very Safe = NO!
9. If You Say No We Will Not Proceed = NO!
No Monster Incinerator Northampton @NoMoInNoHo
​Let's state the facts about these lies one by one.
#1-2     Whatever cheaper energy will be generated will not benefit local residents, but rather it will go to feed larger businesses in town. Of course at present no energy exists and no contracts either, but we believe there have been discussions with two councils (County and Borough), The University at it’s new Waterside complex, The Hospital,  the Carlsberg factory and Churches about receiving cheaper energy or heat.  Rolton Kilbride mislead local residents by initially telling them that they could personally benefit from this scheme but that is not the case.

#4     The 6 month pre planning public consultation is a normal process that developers engage in on major developments in order to submit with their application details of public attitude towards their plans. In this instance Rolton Kilbride announced the consultation very publicly in the Chronicle and Echo on the 1st of December 2015 (still on their website) but then didn’t carry it out. They failed to turn up to public meetings, instead holding private meetings with Councillors and then only when forced did they arrange a hurried exhibition on April 6th which was not well publicised, was next to useless and still contained no valid information as to the scale of their plan or the impacts it would have on the community. To date they have not revealed their exact plans and the first we will know about them is when the planning application is published.  Crucially, the April 6th exhibition also only left a 3 week period between their presentation and their application for planning permission on the 29th of April, failing completely in their promise to give a 6 month consultation period.

#5     They claimed that only local waste would feed the plant, but there is simply not enough waste in Northamptonshire to feed a 200,000 tonne capacity incinerator (which we remind you is 5 times larger than any existing gasification plant of its type in the UK) so Rolton Kilbride have now come clean and admitted that they will need to truck in waste from other parts of the UK. They have also admitted that not only residential waste would be burned but also industrial waste, although at the public presentation on the 6th of April they were unable to say what type of industrial waste it would be or where in the UK it would come from

#6     Rolton Kilbride tried to claim that the air from the stack would be "clear". A representative even had the gall to state that "the air coming out of the stack would be cleaner than the air going in". We now know that the following will be emitted from the smoke stack:
and despite their attempts to disguise this incinerator by calling it an gasification plant or a waste-to-energy plant The filtration systems used in gasification plants do not filter out nano-particles and when Rolton Kilbride or other companies claim that the emissions are safe they do not even measure or take into account the nano-particles which are small enough to be breathed in and pass through people's lungs into their blood stream. (1)
​
#7     So called "waste-to -energy" plants, although they sound green in name are not green at all.  These type of plants undermine recycling.  Northampton has a relatively low percentage of recycling, just over 40 percent of our waste is recycled as compared to many other towns and cities all over the world which recycle 70 or 80 percent of their waste.
A gasification plant or "waste-to-energy" plant is a short sighted solution to a larger environmental issue.  rather than operating in tandem—where recyclables are recycled and only non-recyclables are burned--incineration and recycling typically compete for the same waste materials, the same government funds, and the same waste management contracts. This conflict is particularly clear in so-called “waste-to-energy” incinerators.  Despite the fact that incinerators are below recycling in the waste hierarchy, they are very often prioritized above recycling at the local level, and as a result, they have had a consistently negative impact on waste prevention and recycling efforts, as well as on workers who make a living from recycling.
Incineration is an expensive and rigid, technology-dependent, long-term waste management strategy. Thus, for many local governments, opting for this method means using all or most of their waste management budgets, leaving little funds for strategies such as prevention, recycling, and composting. Incinerators that produce some energy depend upon the materials in waste that have high calorific value, and the items with high calorific value are precisely the materials readily processed by recycling programs: paper, cardboard, and plastics. Burning these valuable materials is wasteful because incineration captures only one fifth of the calories in these materials, while recycling saves three to five times the energy due to energy savings from using recycled feedstock for manufacturing instead of extracting virgin resources. (2)

#8     It isn't safe. There are only two gasification  plants of this type in the UK One 30,000 tonne plant in the Isle of White which has been shut down 8 times for  continually breaching of dioxins emissions limits. (http://www.letsrecycle.com/news/latest-news/gasification-plant-remains-closed-after-re-testing/)

and one 40,000 tonne plant in Dumfries which was also shut down for violating emissions limits and in July 2013 had an explosion and fire which took 14 fire brigades and 70 fire fighters 2 days to extinguish. (https://waste-management-world.com/a/gasification-waste-to-energy-plant-license-revoked-in-scotland-after-fire)

The proposed Northampton site would be 5 times larger, at 200,000 tons capacity and would be built close to two existing BP fuel tanks. A Freedom of Information request revealed  an email chain between planning consultants MFD International and Northamptonshire County council discussing a “blast zone...study/anaysis”.

In the email, dated March 12, 2015, MFD International said it was working for Rolton Kilbride in producing such a study for a planning application because of the Westbridge Depot’s proximity to two “existing fuel tanks”. Read about it in this recent article in the Chronicle and Echo. (http://www.northamptonchron.co.uk/news/fears-over-blast-zone-report-for-northampton-power-plant-are-unfounded-claims-developer-1-7349356#ixzz46uflYlaV)

#9     The most blatant lie of all, Rolton Kilbride stated that if local residents were not in favour of the plant being built that they would not "go to war" with residents and they would not proceed with construction of the plant.  It is our belief that they had hoped to receive planning permission and go ahead with the project without local residents even being fully aware of the plans, so that it would be presented to the public once it was too late to do anything about it.  We, the local residents, have now made it very clear now that WE ARE AGAINST this plant being built, and Rolton Kilbride is choosing to attempt to push it through the country council's approval process despite our strong opposition. 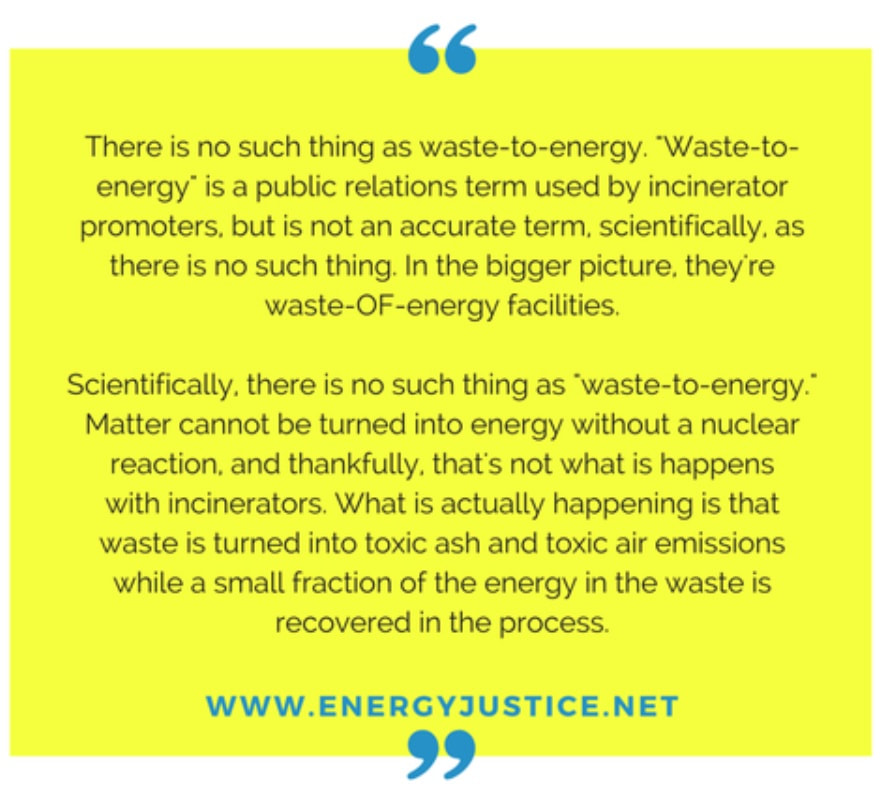