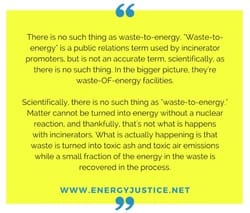 Scientifically, there is no such thing as 'waste to energy' Matter cannot be turned into energy without a nuclear reaction, and thankfully , that is not what happens with incinerators. What is actually happening is that waste is being turned into toxic ash and toxic air emissions while a small fraction of the energy in the
waste is recovered in the process. http://www.energyjustice.net/

Gasification is defined as incineration by the U.S. Environmental Protection Agency and the European Union.

The filtration systems used in gasification plants do not filter out nano-particles and when Rolton Kilbride or other companies claim that the emissions are safe they do not even measure or take into account the nano-particles which are small enough to be breathed in and pass through people's lungs into their blood stream.

'"Incinerators with names like "gasification," "pyrolysis," "plasma arc," and "waste-to-energy" all emit dioxins and other harmful pollutants, despite industry claims that they are "green" technologies.
Dozens of start-up companies are working to site a new generation of toxic "incinerators in disguise" in communities throughout the world. These are incinerators with names like gasification, pyrolysis, and plasma arc that are promoted by waste companies as "safe" and "green" for community health and the environment. Many of today's incinerator companies claim that they can safely, cost-effectively and sustainably turn any type of material such as household trash, tires, medical waste, biomass, refuse-derived-fuel and hazardous waste into electricity and fuels like ethanol and bio-diesel. Some companies go so far as to claim that their technology is "zero emissions" or "pollution-free" and not, in fact, incineration at all. However, all of these technologies emit dioxins and other harmful pollutants into the air, soil and water, and they are defined as incineration by the U.S. Environmental Protection Agency and the European Union.

Incinerator technologies such as plasma, pyrolysis and gasification do have some different processes when compared to conventional mass-burn incineration. While mass-burn incinerators combust the waste in a single chamber, these incinerators typically heat the waste materials at high temperatures in one chamber with less oxygen present, and then burn the waste gases in a separate chamber connected to a smoke stack. Regardless of the technology used, the core destructive impacts of all types of incinerators remain the same.

Recent research  has demonstrated the very high releases of dioxin that arise during start-up and shut- down of incinerators which is especially worrying as Rolton Kilbride's claims about the safety of modern incinerators are based only on emissions which occur during standard operating conditions. The BSEM state that of equal concern is the likelihood that these dangerously high emissions will not be detected by present monitoring systems for dioxins.(1)
​
Incinerators negatively impact public health, local economies, the climate and the environment. The short track record of pyrolysis, plasma and gasification incinerator technologies has shown even higher costs, less dependability, and inconsistent energy generation. In addition, data show that dioxins, furans and other toxins are formed in these systems, and in some cases, toxins are formed in higher quantities than in conventional mass-burn incinerators...... " (2) 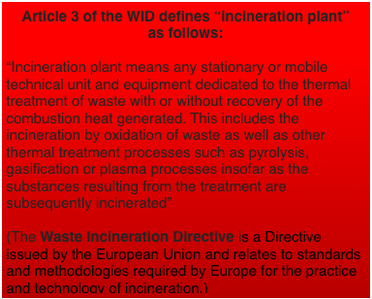 Video explanation of how gasification works

For more information you can download this fact sheet, produced by GAIA ( The Global Alliance for Incinerator Alternatives) and Greenaction for Health & Environmental Justice which articulates the serious flaws with these technologies and highlights the benefits of aiming for zero waste instead.